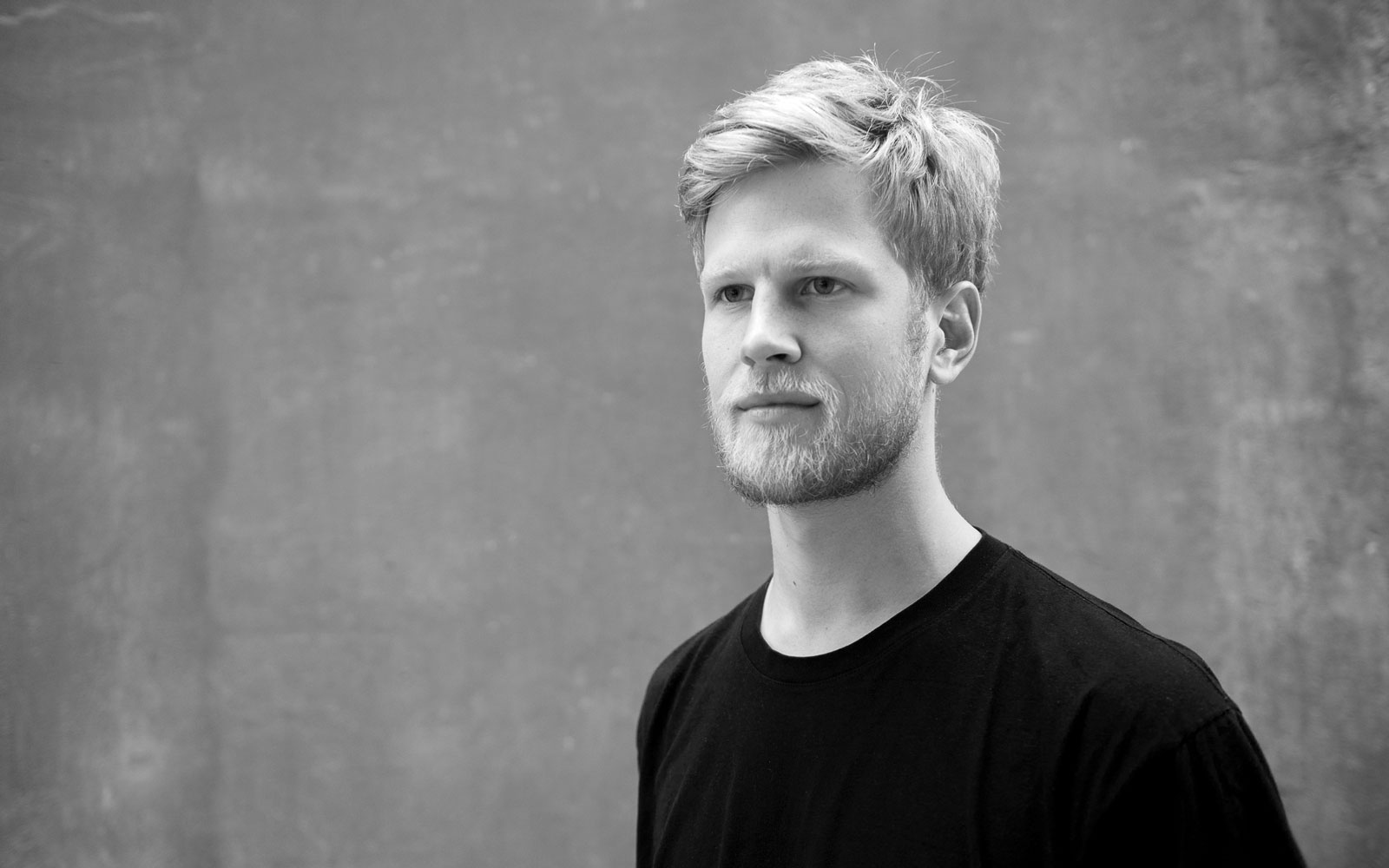 ALL EYES ON ACE

We visited Hans Hornemann in Normann Copenhagen’s design studio in Østerbro to talk about his creative process, what it’s like to live in Copenhagen, and his newest addition to the company’s product portfolio: the stylish Ace collection.

At age 27, Danish designer Hans Hornemann has had a steep career. Starting out as an intern in 2013, he has since been behind the design of the Rope sofa, the Slice table, the Buzz fly swatter, as well as the creative direction for the fair stands at Salone del Mobile in Milan, Stockholm Furniture Fair and Maison et Object in Paris.


When we arrive at the design studio in Copenhagen, Hans greets us with a big smile. The studio is buzzing with creative energy, with sketches of current and upcoming designs lying across the desks, next to samples of materials and textiles. We sit down to talk about how he initially became interested in design and his inspiration for the new Ace collection, which just became available. 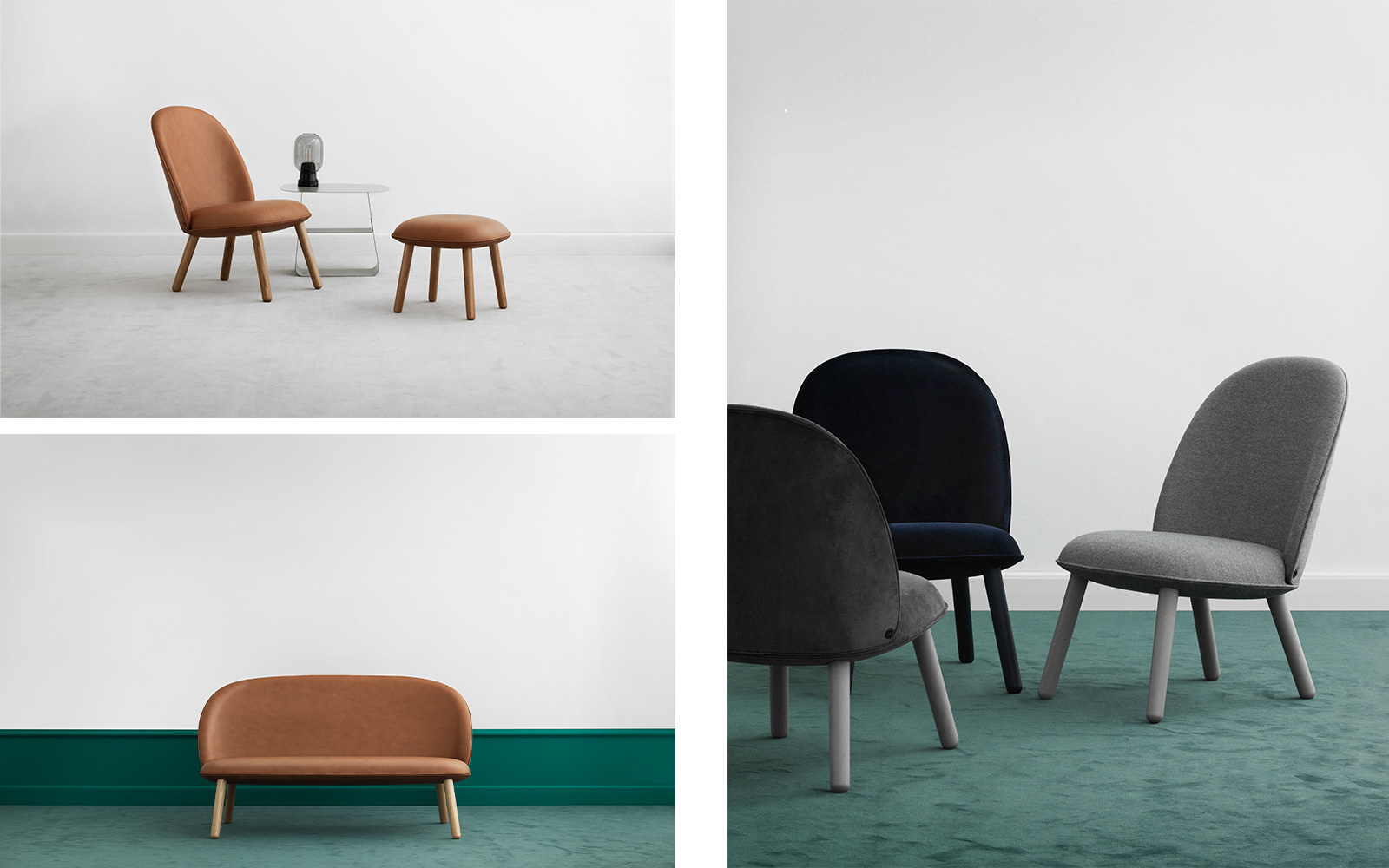 The Ace longe collection in leather, velour and wool.

“I have always been fascinated by beautiful things,” he says. “Especially when something technical is combined with beautiful aesthetics. Already as a child, I had a strong interest in architecture, and also experimented with photography in different ways. It actually wasn’t until I started university that I became hooked on furniture design. It just seemed to combine everything that I was interested in, in terms of aesthetics, craftsmanship, technical details and functionality,” he explains.


When he was 23, Hans moved from his hometown Aalborg in Northern Denmark to the capital to pursue his career as a designer. He now lives in Vesterbro, a trendy and lively neighborhood with many shops, small cafés and restaurants close by. “Vesterbro is one of my favorite parts of the city,” he says. “The meatpacking district just gets better and better, and there is still a wide variety of different people living in Vesterbro. There is also a small part of the ‘old’ and more tough Vesterbro still left. It is a great mix of many young people, old people, families, and so on.” 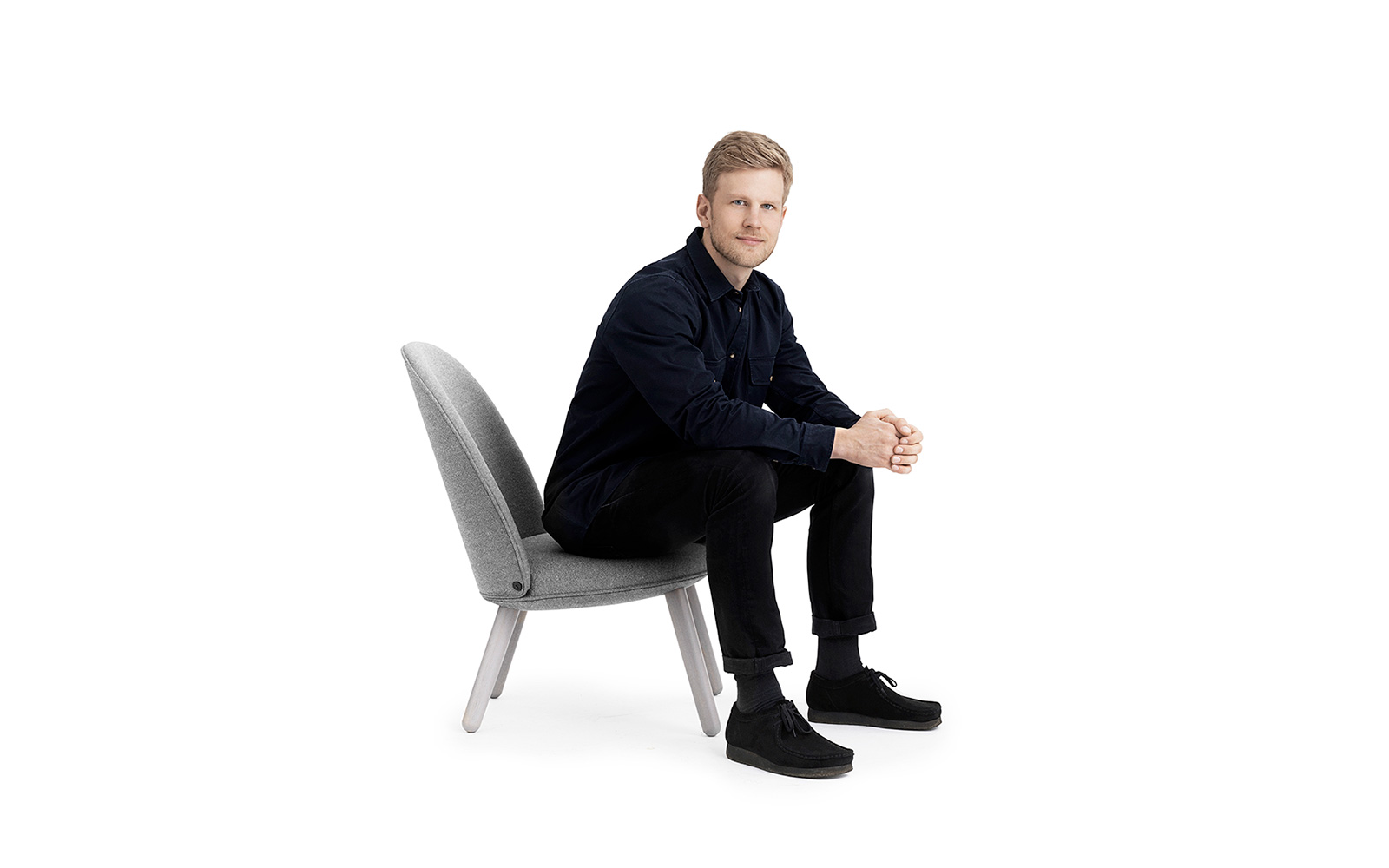 
Apart from his neighborhood, Hans takes inspiration from many different places. “There are also other creative people that feed me with positive vibes and good inspiration,” he says. “Apart from that, inspiration can happen almost anywhere: like when I am out in the countryside, or when I am traveling.”


“Nowadays, more and more people live in cities, without a car, in smaller spaces, and with no patience.”

In the case of the Ace collection, the starting-point of the design was Hans’ own way of living. “Nowadays, more and more people live in cities, without a car, in smaller spaces, and with no patience,” he laughs. Particularly in Copenhagen, there are many people who own a bike rather than a car. Hans goes on, “All my friends are constantly moving, from one small apartment to the next. So I had this idea of being able to cycle down to a shop, fall in love with a chair – and then be able to take it home on your bike on that same day.” 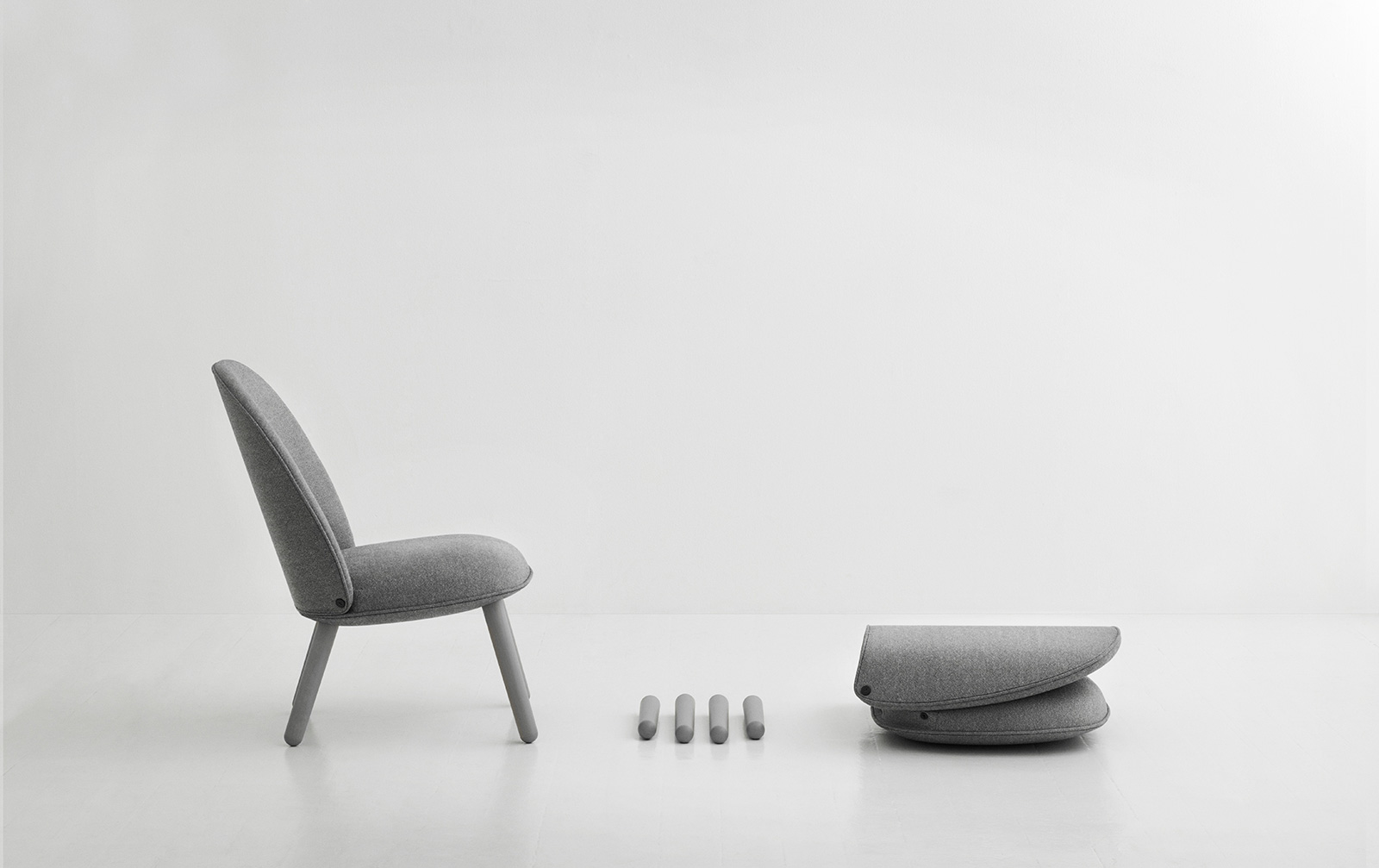 To realize this idea, Hans challenged conventional flat-packed furniture, and wanted to combine it with a sense of exclusivity in a new and unexpected way. Hans remembers: “I tried once to assemble a closet. We were two people and spent six and a half hours. Of course, that was anything but exclusive! I believe that the assembling process also needs to be a fun experience. An experience that should not take too long, and give the user a feeling of a 100% complete product.”

The designer therefore wanted to make sure that the design of the flatpacked furniture was done on his terms. He explains: “Currently lots of existing flatpacked furniture concepts are based on leaving the entire process to the end-user. This is often a shame and often the user becomes frustrated by all the screws and steps. This inspired me to create something new – and different.” 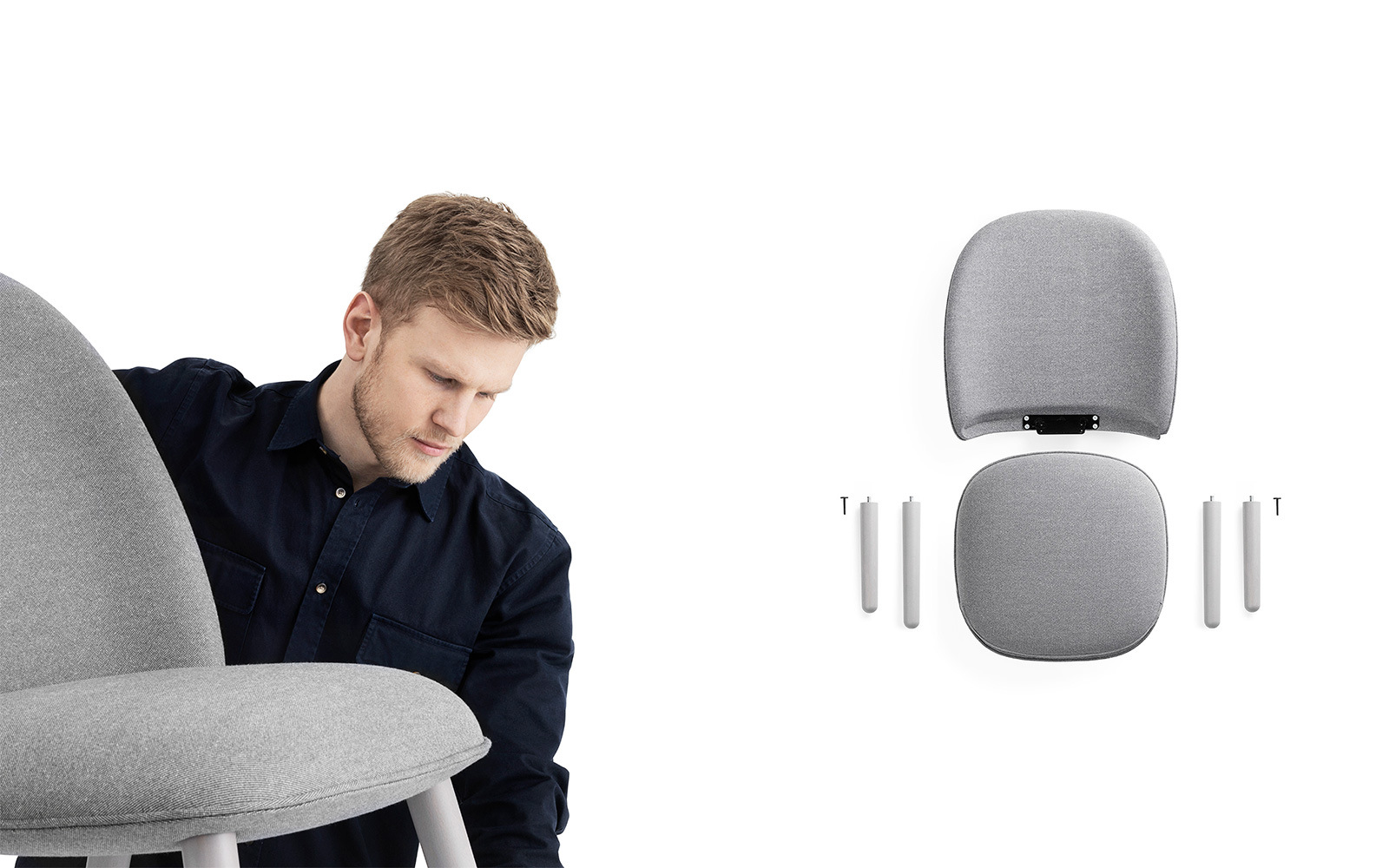 The Ace collection is quick and easy to assemble.

On his mission to create a flatpacked lounge furniture series that feels exclusive and special, Hans submerged himself into the details of manufacturing such an innovation. He has always been fascinated by different manufacturing techniques, “particularly when they combine newer or more traditional manufacturing in interesting ways,” he says.

“I definitely learned a lot about the specific production methods that are used in the product, its functionality and shape, and how to make the two things work together,” he explains. “I grew up with the Scandinavian design tradition, where the form is honest and true to the function, so naturally this was also an important factor when I designed the Ace chair.” 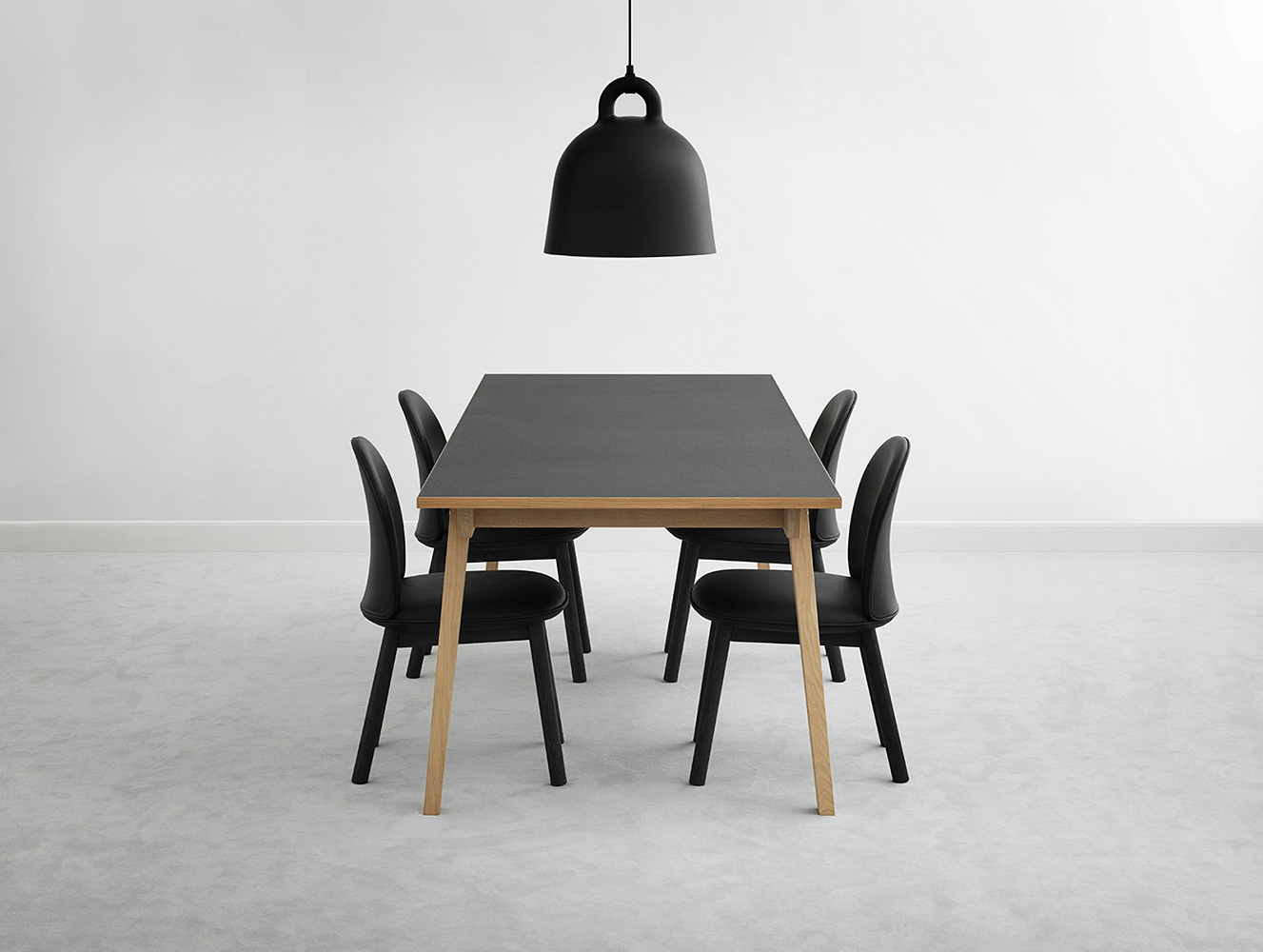 The Ace chair in a dining room arrangement.

The result of his hard work was revealed for the first time at the prestigious Salone del Mobile furniture fair in Milan in spring this year. We wanted to know how it felt to have his collection presented at such an eminent place.

“No doubt, it was a thrilling feeling in the days leading up to the fair. What would people think? And if people didn’t like it, the entire thing would have been for nothing! I guess you can imagine a small pressure...,” he smirks. “But when the project was launched and everything went better than expected, the feeling was great! I felt relieved.”

Besides being behind the design of a number of furniture pieces, Hans has also been responsible for the creative execution of many furniture fair booths, as well as the interior design of the new Normann Copenhagen showroom, which will open in Copenhagen in September.

Regarding the process of designing, however, Hans finds a large part of the process is often actually the same. “In our time, people often make a clear distinction between architects, designers and artists. I think that is a shame because the entire approach to a ‘problem’ or rather to a ‘challenge’ is very much the same - no matter how big the object is that is designed.” 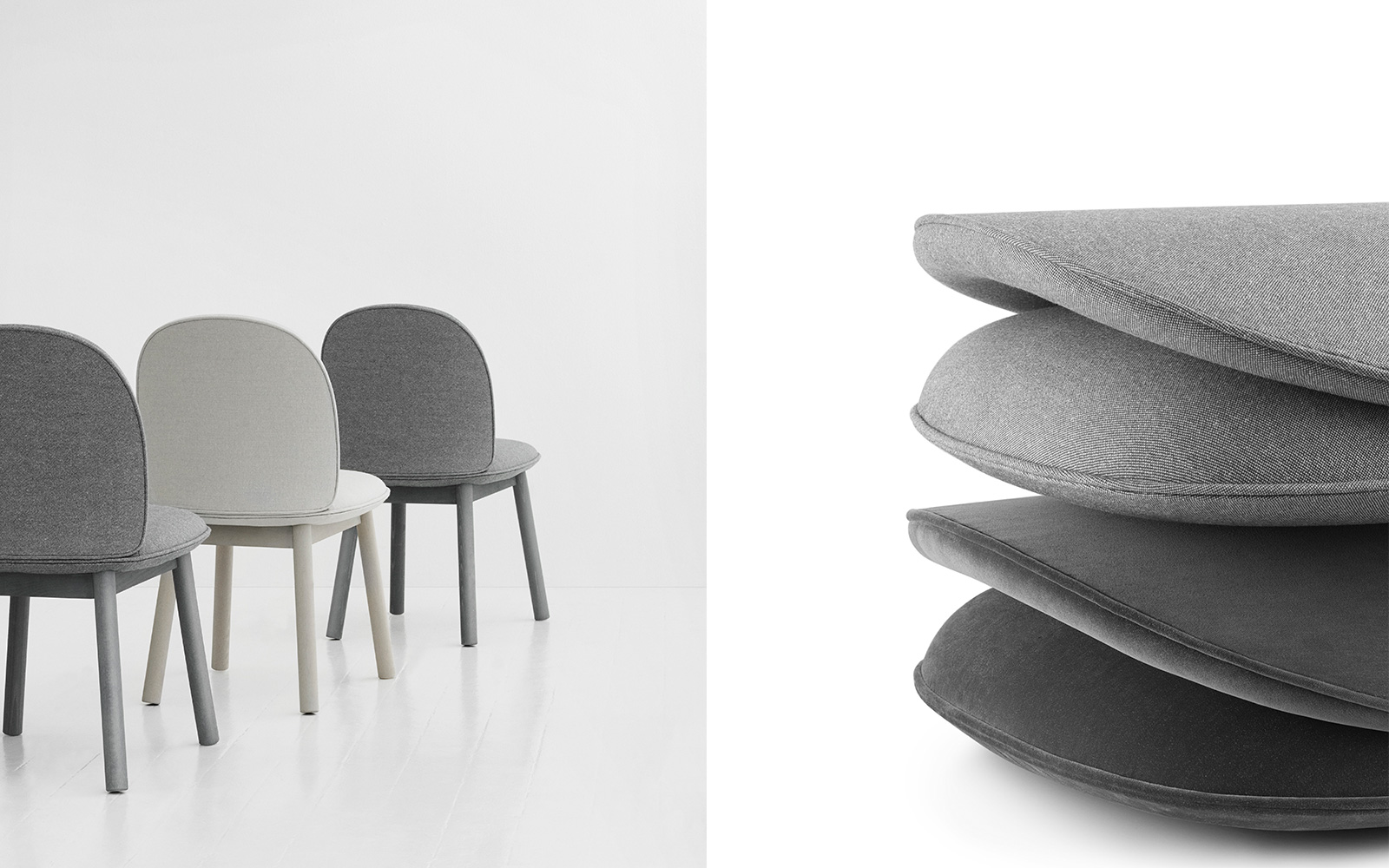 Detail of the Ace dining chair.

Hans goes on explaining: “In the Bauhaus period, for instance, there was one school for all the different fields of the visual creative business: from architects, to furniture designers and graphic designers.” 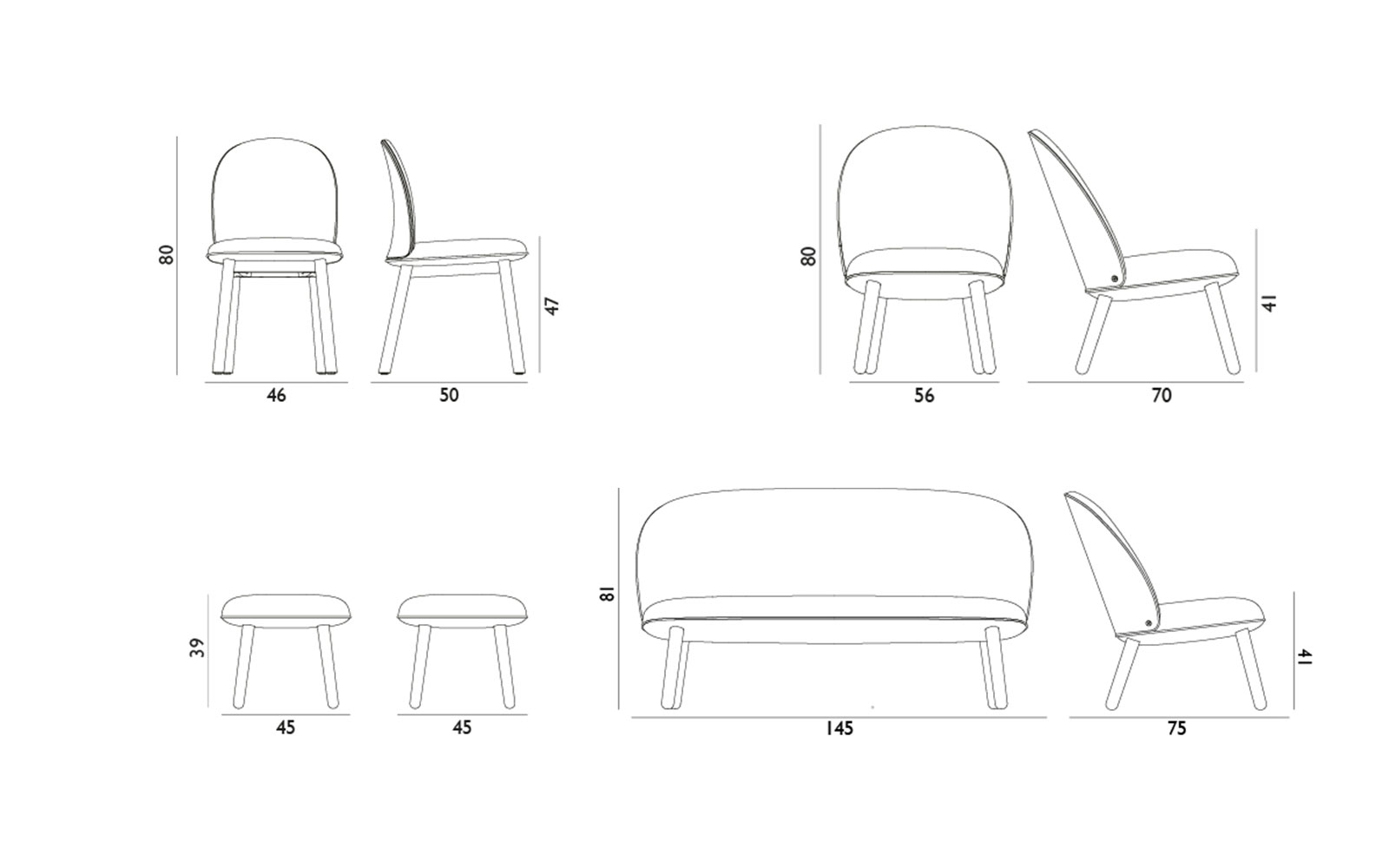 Detailed drawing of the Ace collection.


This becomes clear looking at the incredible attention to detail he has paid, from its design to be effortlessly assembled, the selection of high-quality textile material, its finishing, up to the flexible back side, that has a springy feeling when leaning back into the chair.


Looking around the studio, it is easy to get inspired for new projects. We wonder if he has got a trick or a routine to get him into a creative workflow when working on a project? “Actually not,” he replies. “I think each project can have a different beginning. An idea can appear over a glass of wine or when I’m biking, when I just stumble upon something interesting, or when I am working systematically for a solution to a specific demand.” 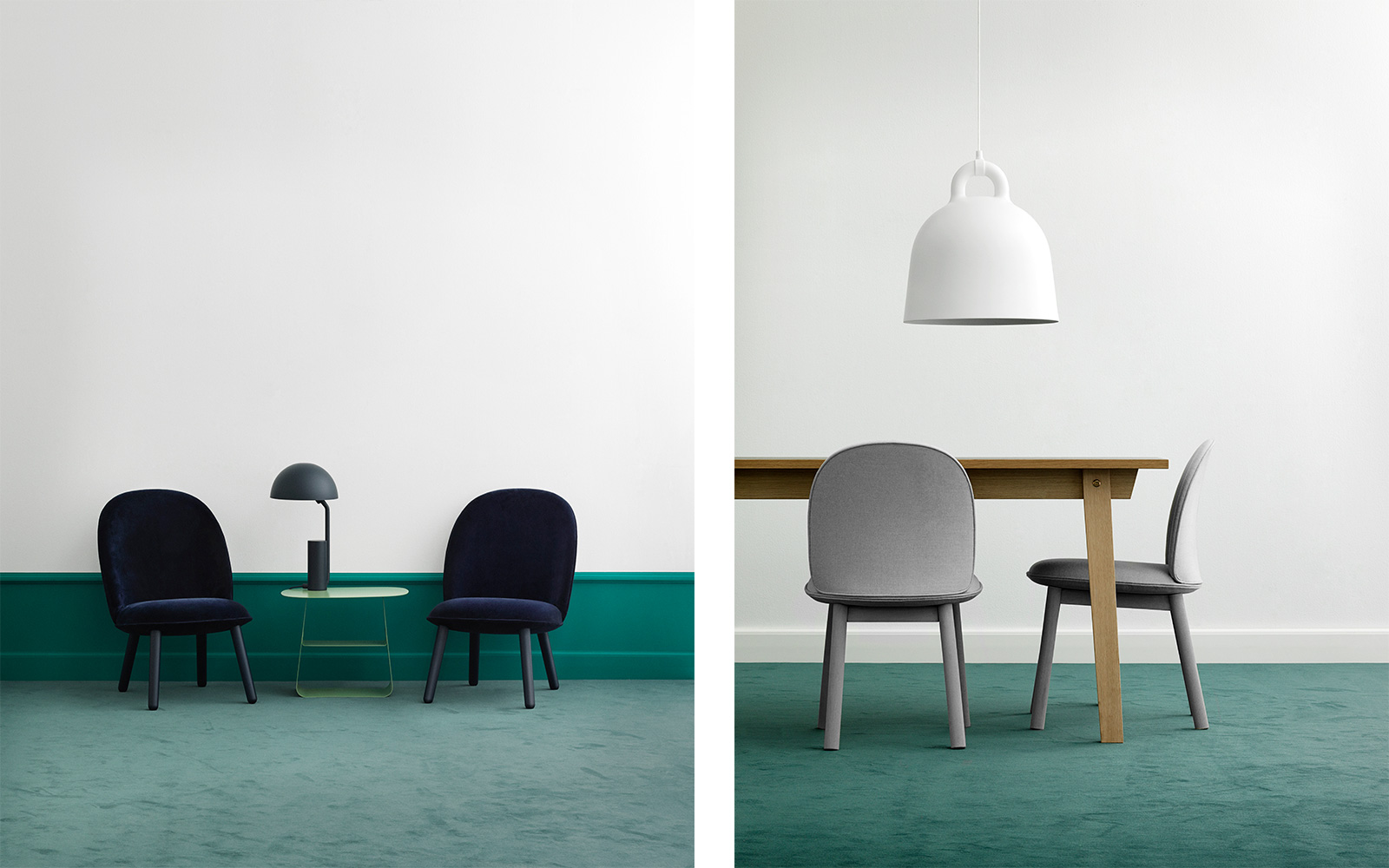 With all that is going on in the life of Hans Hornemann, it is hard to believe he is getting much relaxation to give his curious mind a rest. “I can easily relax without stopping to be curious,” he replies. “But a good way of relaxing is in my opinion on a good night out with friends!”


Time to sit back in the Ace chair, and see what’s next for Hans. Surely we can expect a lot more to come. The Ace collection consists of a lounge chair, dining chair, sofa and footstool, available in a vibrant velour, a flecked wool textile, as well as an exclusive leather. Get yours here! 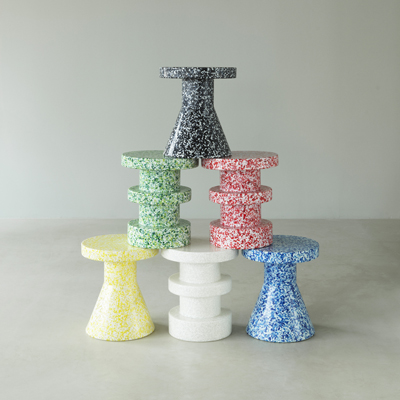